A  batch of half a dozen twelve inch sleeve finds which has piled up lately, all of which have something interesting about the packaging. 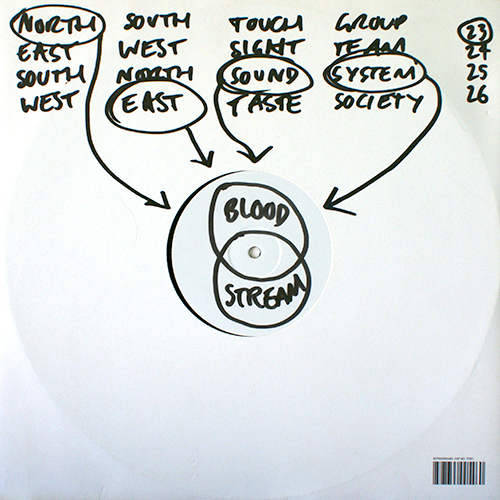 North East Sound System‘s 12″ Blood Stream plays with the notion of a cover. One side is just blank, the other has hand-written felt-penned words, some circled and just pointing at the label.  Except they’re not hand-written, but properly printed. North East Sound System don’t have much of a web presence and the label twentythree records (which is based in Sheffield) don’t even list it in their discography. It came out in 2003. Design : unknown.

Primal Scream‘s 1998 cover for If They Move, Kill ‘Em was considerably bigger budget stuff, but retains a ready-made feel. It takes a photograph of a dive bomber, then works with the half tone process (maybe the original is from an old magazine) and Japanese typography to produce a vivid sleeve. The bright solid colours help.  On the reverse they continue the theme with distressed text on the titles and credits.  It’s on Creation Records, design is credited to House @ Intro. I think this will be Julian House. Intro is a large agency and they have done a lot of work for the music industry (while JH I see did the poster for the film Morvern Callar so deserves an extra gold star.)

Playing with special inks again, this sleeve for SpeedyJ. Literon‘s Collabs 200 12″ is on Mute from 2004 and I wasn’t massively surprised to (eventually) find a Designer’s Republic credit – on the spine. It looks at first glance to be just a simple paint smeared image but the more you look at the cover, the more detail emerges – little snippets of miniscule type (Japanese again), bits of photocopied fingers, edges of a book, etc. One of those designs on which the designer has just enjoyed experimenting, and which would be impossible at CD size.

I featured a Hospital Records plain cover 12″ not long ago (shown here) but this one for Danny Byrd is a lot more colourful. I’m not 100% sure how the artwork was done, but would guess the letters were hand cut out of a sheet of card, then this sheet was placed on a plain piece of card covered with glue – and just showered in coloured cake decorations. This was then lit and photographed. It works really well. Issued in 2010, the art is credited to Trickartt; Ricky Wilson-Cloot, a London designer who handles all of Hospital’s design needs, sleeves and beyond, as well as other clients.  http://www.trickartt.com/about/

Obviously I’ve no idea who Boxsaga are but the dense typographical block on the front of their Back Inside sleeve looks great. The back (not shown) also goes for the overlayed photocopied look like the Primal Scream one, but pulls it off rather better I feel. They even make a virtue of the dust on the scanner bed. It dates from 2004 and is credited to Matt@MVOR.com, one Matt Appleton, who hasn’t updated his website in ages. He can however be found at http://www.legunshop.com

Monochrome also rules on what looks like a generic sleeve for Nature Sounds Records, which wittily (I thought) juxtaposes a vintage ghetto blaster against a tree trunk. Nature Sounds is an indie New York hip hop / reggae label (still hard at it) and this is from 2006. If you line the label up it completes the design, I always like that.  Shame I didn’t think of doing it before photographing the cover…