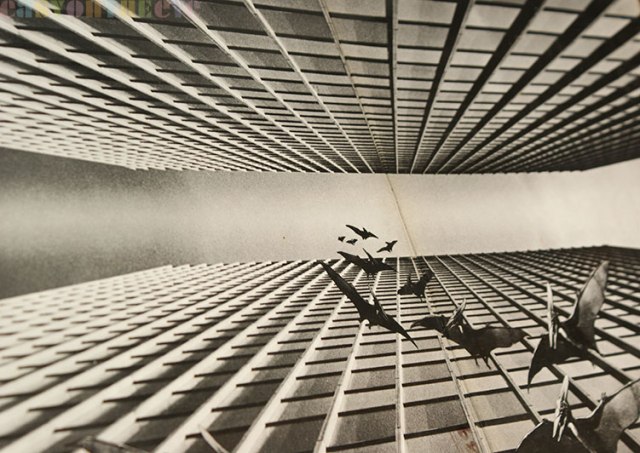 The debut album from hard rock trio Quatermass came with one of the best of the early Hipgnosis sleeves, and one which has long been an ST33 favourite. Hipgnosis were able to get a number of commissions from EMI’s fledgling ‘underground’ label following their initial design for Pink Floyd’s Saucerful of Secrets in 1968. If I’d had spare cash as a teenager I would probably have picked this up just for the cover, but as I had never heard the group it was not until many years later I treated myself to an original laminated gatefold.

The concept is successful partly because of the simplicity. A heavy perspective view of an office block is repeated to create a concrete and glass canyon, and the widescreen view is a little reminiscent of the famous 2001 psychedelic scene. Down this monochrome canyon swoop a flock of pterodactyls, disappearing into the distance on the back of the gatefold.
Having found their flying dinosaur, this would have been copied onto film and several printed out, then montaged onto the background before the complete board was reshot.
The lettering – just the band name – is in Eurostyle, or rather Eurostyle’s predecessor Microgramma, designed back in the early 1950s and later one of the early Letraset faces. The slightly sci-fi look of this design helps add that touch of otherworldliness to the cover.
There is no doubt that the addition of the overlarge EMI Harvest logos on the front were a bit of an intrusion and might have been better moved to the back but most labels still clung to the idea of having a large front cover presence at the time.
Unknown’s are where the building was, and where the dinosaur image was lifted from. Storm Thorgerson was later asked to tweak it for the first full CD reissue by Repertoire. Curiously he changed the typeface altogether, as well as repositioning some of the creatures.
The inside gatefold is actually quite a different look, with a grainy faded portrait of the band (looking like it was taken in a Victorian glasshouse), against which the lyrics and credits are displayed.

I actually did the CD sleeve for Quatermass 2 many years later. Only drummer Mick Underwood remained on what was a studio project. I tried to do something of an homage, using a moody sunset shot of a winter wood (from a landscape photographer friend) with the pterodactyls flying around as if getting ready to roost. Much of this was lost as the band wanted to crank up the size of the typography and insisted on the musician’s names being on the front (rather than as a sticker). There was little market for vinyl at the time, otherwise I might have been able to get my own way on that! The album was later reissued in an astonishingly cheap looking cover.