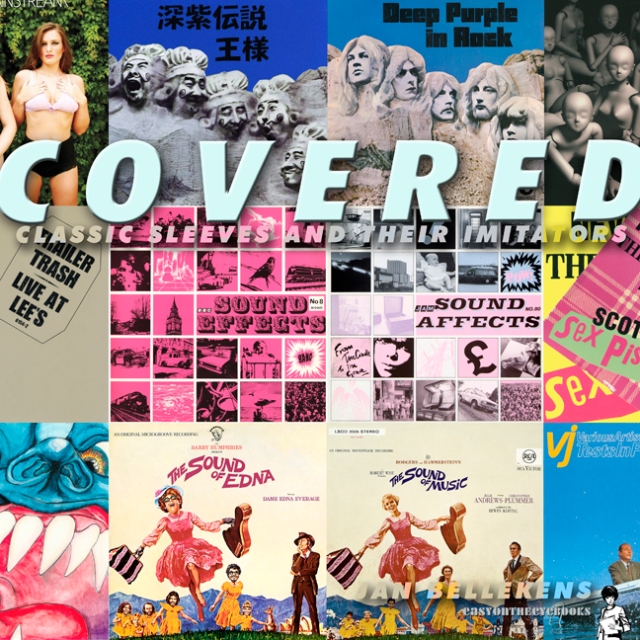 As every good MP does before voting, I must declare an “interest” here, as this is the first book from Easy On The Eye, so I’ve had a hand in bringing it to market. Having had my say about other books on album art in the past, there is an element of put up or shut up about getting this title just right.
Two years ago Belgian collector Jan Bellekens contacted me seeking information on a couple of sleeves on the site. He explained he was collecting and researching records which copied older sleeve art. “Sounds like you should do a book,” I emailed back. “I have, but nobody wants to publish it!” came his response.
Well fair enough, it is a bit of a weird subject, but then weird is what we do, so an agreement was thrashed out and here we are.
I’m sure we all know the feeling when browsing through some albums or cds and all of a sudden one crops up which causes a moment of recognition, a feeling of “haven’t I seen this cover before somewhere?“
The answer is that you might well have done. For just as popular music of the present day seems to rifle the albums and bands of earlier generations, so the sleeve designers are far from reluctant to lean on the past for inspiration. Perhaps a lot more than we realise. Sometimes this is done by way of a deliberate reference point. In other cases the band might be wanting to pay homage to their influences, or peers. It might simply be that they have just seen an old cover which they like so much they want to borrow it.
On other occasions the similarities are less well intended, designed to mimic or (dare we say it) even poke fun at classic designs and bands. Sometimes the new covers are simply a deliberate spoof of a well-known piece of artwork, done for subversive or mischievous reasons.
And that’s what this book is stuffed full of; over 970 sleeves in total, all shown in full colour. The layout has been designed to show off the new covers, with the originals (which a: most people in the target audience would likely know and b: to save space) in a reduced size alongside, tinted back a touch.
The main body of the book is stuffed with the covers, but there is also an introduction and an index so you can quickly look up your favourite group and see who has been nicking their sleeves. Each copy sleeve is annotated by Jan, with artist, designer, release year, label and so on. My contribution, apart from the design and artwork, is a paragraph or two about each original cover and who did it, and comments on the way they’ve been borrowed. 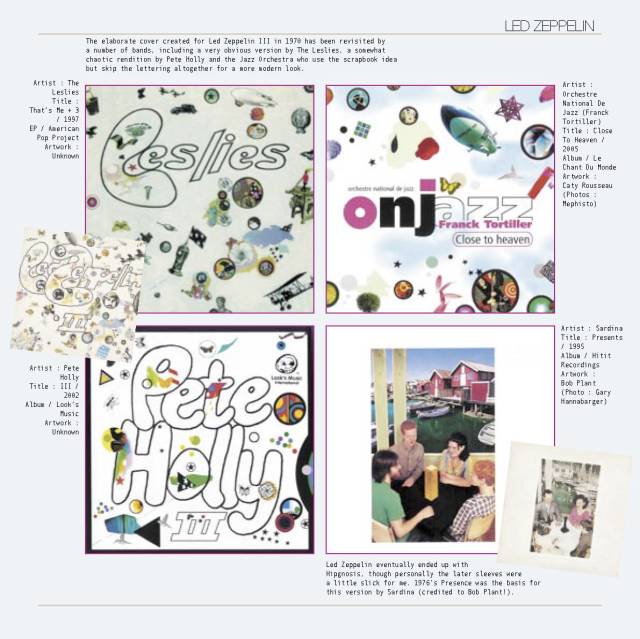 Each page (which is square and 7″ single sized) has four new covers plus text. You can see a much reduced sample page above. There does seem to be a mind-set that album sleeves must be shown full size, but to me this rarely works. Here the fun and interest is in seeing how many bands and designers have borrowed from the past, and in what way (never mind that some were a bit worn, and others were so poorly printed originally that the covers wouldn’t take much blowing up). Where gatefold sleeves are involved, or a famous sleeve has been borrowed a lot (the Beatles top the list, with the number of copies of Abbey Road alone running into three figures!), the layout has been adapted to best show the material off, with a couple of great spreads showing off lots of copies side by side.
So you get Ian Gillan of Deep Purple, just kicked out of the group and understandably angry at them, referencing one of his former band’s classic covers, but highlighting himself and blurring away the rest of the group on purpose. Deep Purple iconic 1970 album In Rock itself has, over the last forty years, provided dozens of groups with cover ideas. Then there is comedian Barry Humphries commissioning a very clever pastiche of the familiar Sound Of Music album cover, only with himself in a frock dancing up the hill instead of Julie Andrews.
Paul Weller’s band The Jam did an album called Sound Affects, and wanted a cover which recalled the pioneering series of BBC Radio sound effects albums of the sixties. Those early sleeves (we’ve featured them on the site) used a grid pattern of logos and images to convey the audio content, an idea which was closely followed by The Jam – even down to the band imitating the typeface of the BBC logo in their name. The end result was a knowing design which only older fans would have even been aware of.
Perhaps one of the most famous examples is that of the Clash album London Calling, which brought together a photograph of the arch Punks trashing their guitars and hand-drawn lettering which turned out to have been lifted from an early iconic Elvis Presley record sleeve. That was as nothing compared to the zillions of bands lifting the Sex Pistols art.
And so on, across 160 pages! Jan has scoured the second hand stores and record fairs of Europe and assembled an amazing collection. I have to say putting it together has been a lot of fun, and often I found myself laughing out loud at some of the cheeky covers – as well as wondering how on earth others got away with it. Hopefully other sleeve art fans will enjoy it just as much.
You can see some sample page spreads, download a fab screensaver, and read more about the book (which has already got press in the UK and Europe) at the Easy On The Eye Books site (there is an online store there as well). Thanks to the publisher, we can also show a 25 page sampler from the book. This is a PDF file, size approx 1.9MB. It’s not full size resolution but gives a great idea of how the book looks.

As with any title there are always new things to discover and the following updates relate to sleeves shown in the book: The T. Rex cover for Slider is one of their best. In the book I credited the photo to Ringo Starr, which is what the album says. It lies! John Tucker emailed to tell me the full story. Apparently Marc Bolan had bought himself a nice new Nikon F with motorwind. While he was filming the Mad hatter’s Tea Party part of the Born To Boogie film he handed it over to his manager Tony Visconti to take some pictures, and these were then used for the sleeve (the rear hat shot Bolan had in mind for the front cover.) Visconti suggested that it would give them a bit of extra publicity if they credited these photos to Ringo Starr (who directed the film) rather than himself as merely the album producer of the record.

Richard Allen has been involved in the reissue of many psychedelic albums and got in touch about a couple of the covers in the book. The Suicidal Flowers Elevators album art was done by Ivor Trueman (my ex business partner) We issued it on a label called Arsenic I think but it was a Delerium sub label.
The Porcupine Tree cover is actually a redesigned one that Steve Wilson got his mate to do and this has now been replaced with a cod psychedelic sleeve design. My original version (on the original CD EP and 12”) was much better and aped the Leary album on the front and also the back, which is pretty funny. Porcupine Tree are a very straight band so all this went right over their heads.