George’s Shop (with no name!), Southport

April 2017 : Sadly George died recently. We know his shop was loved because this page gets more comments, enquiries and hits than that for any other shop I posted about. His son has posted in the comments below and is looking at ways of carrying the business on and reopening the shop. I’m sure we all wish him the best at a difficult time.  The entry below was posted after my first visit.

The coastal town of Southport is home to a few stalls of vinyl in antique centres and the usual array of charity shop boxes (as well as the crassest sea front barn shopping outlets, which have totally chaved up their most famous asset – anyone else would have hidden these dreadful places away on the landward side of town, not ruining the front!). But even many locals don’t know of George’s Records, hidden away beside a concrete access ramp up to a first floor car park above the abandoned Waitrose store.

George used to have a store near the indoor market with an on-street front, but it was so tightly packed it was almost impossible to get to look at the records, so he moved to his current lock up a few years ago – and just didn’t tell anyone, reasoning that people would find out by word of mouth! I would never have found the place without the help of resident Vince Kelly, and it took him some months to discover George’s new hideaway.

To compound the air of mystery the shop front has no signage whatsoever, apart form a small A4 sign which you can see from at least, ooh, six inches away.

He took his Dexion racking with him and yes, you can move around a little easier – though you will get to know fellow browsers more intimately than perhaps you might wish to at times! George is also making the mistake of starting to dump boxes of new stock in the aisles, but for now you can still get to see most of the vinyl without too much aggro. Apparently he has loads more ready to be sorted, and more at home ready to bring down.

George has been running second hand shops in the town for at least 15 years, originally doing bric a brac and books, but as stock got harder to source he settled down to specialise in vinyl. Plus you have to get up very early to beat him to the charity shops! Though to be fair, he does help a couple of local charity shops value their new arrivals and gives them a good second hand price on anything he feels he can find customers to – a kind of you scratch my back approach which the greedier charity shops (hello Oxfam) could to well to emulate.

The bulk of the vinyl is laid out alphabetically, without any attempt to lump into categories – so the vocal harmonies of Ray Conniff rubs shoulders with the vocal histronics of Rainbow (Ronnie Dio excepted) – plus there are sections for film music, childrens, spoken word and a few other more specialised areas (though you will have to ask as nothing is marked). So prior to a visit it helps if you know what you’re after, though it is just as much fun to flick through and see what pops up. 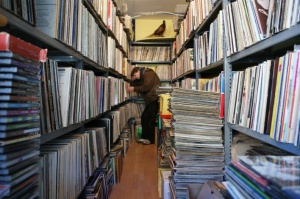 He has also set up a classical section, done by label. I was astonished to see what some of my early Decca classical albums are now fetching; I picked them up for pence just for the great fifities cover illustrations (done by some quite famous artists) but it seems that the performances are now becoming sought after.

Under the racks are boxes of vintage 10″ format pressings, where Winifred Atwell 78s mix it with Whitenake (now there’s a thought) limited editions in white vinyl, and of 12″ singles too. All this plus random boxes of 7″ stuff and piles of new arrivals waiting to be racked out, and you can have great fun browsing. There are plenty of alt.shopping attractions close by if you better half doesn’t share you enthusiasm!

On my visit to take the pictures, I came away with a lovely 10″ of Picnic Tea music, a smashing Canadian cover version of the Valley Of The Dolls film music, and a couple of well designed spoken word albums from the 50s. George saw Vince coming and pointed out a clutch of recently arrived sixties French dolly singers – Francois and Sylvie being added to his haul of obscure funk singles. Plus he does do a good deal on bulk buys.

Then it’s off to the Westminster Tea Room for a bit of afternoon tea and to pour over the covers.

The man himself, slightly over-exposed…