I don’t go out of my way to pick these store sleeves up but it seems a shame not to bring them home when I see them!  So here are four more I have stumbled across in the last few months. An earlier page of shop sleeves is on the site.

MUSIC BOX was a Sheffield shop out in the industrial suburb of Darnall, and I already have a 78 sleeve with their details just stamped on. But this printed sleeve was new to me, and suggests they were going in the post-war years.  The area has been pulled down and redeveloped but the shop was in a terrace row.  As well as records they advertise associated electrical items like record players and radios, plus other appliances.  They seem to have kept the top twenty in stock but as with many small shops could order up more or less anything for local customers. Darnall was a large shopping area and many people would never have had to go into the city itself to shop. 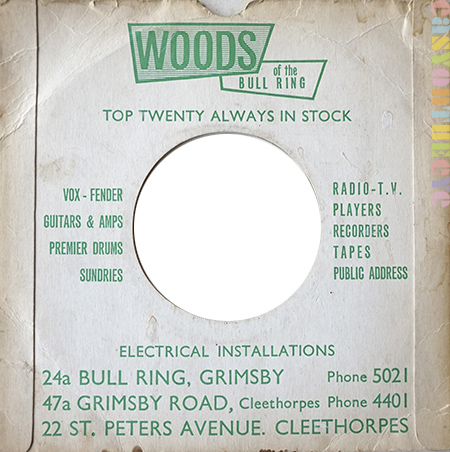 I don’t know Grimsby too well, but WOODS seem to have been quite a busy shop, sold musical instruments and also carried out household electrical work.  They also had two shops in the nearby resort of Cleethorpes, which was a popular tourist destination so probably attracted a lot of teenagers. The area was decimated by ill advised redevelopment many years ago.

Whitby I know better but this shop is new to me, ALFRED HEADLAM – The Record Shop.  This shop sleeve has been used to keep a copy of I’m Telling You Now by Freddie & The Dreamers in, which dates it to before 1965. Golden Lion Bank is a small pedestrian access route down near the harbour so the shop premises are likely still there. 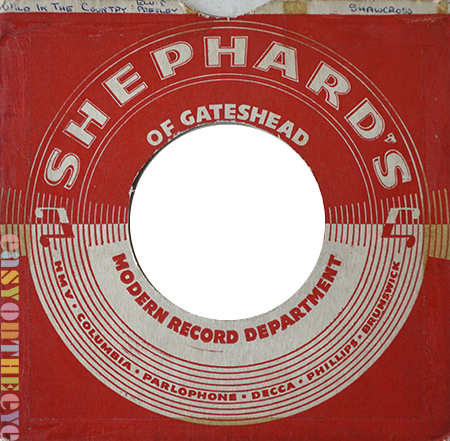 Last of the quartet is SHEPHARDS of GATESHEAD. This was the towns largest independent department store, and like many had a dedicated record department in the Fifties and Sixties.  It was a large modern building put up in the late 1940s but after the business finally closed in 1980 was demolished.  It’s now a Tesco car park. What a total waste of a fine building (see below).  This record sleeve dates from the Sixties and was in the collection of someone called Shawcross. He or she had bought an Elvis Presley single in it originally, but later swopped up for Deep Purple’s Speed King.