It’s a little difficult to say what the proportion of sleeves using photographs to illustrations is, but three examples of the latter piled up in my ‘to do’ box recently. Specially commissioned paintings, all very different but quite eye-catching in their own way.

The painter of this interesting sleeve frustratingly eludes me; there is no signature and no credit. The album was released in 1968 on the mail-order only World Record Club UK label, a company who often had very clean uncluttered designs for their covers.  They used a lot of specially commissioned illustrations (and rarely credited them) and this slightly Bacon-esque approach is very simple and striking, complimented by simple type.
I reviewed a book about the Australian World Record Club on the site some time ago (they used the same recordings but did their own packaging) but nothing in there seems to be by the same person. There is a WRC sleeve by John Piper on the site too.

Luckily (it is signed but I couldn’t make it out) this sleeve is credited on the back, to Guy Deel, a illustrator born in 1933 in Texas. He specialised in illustrations and paintings of the Old West for books and I don’t know of any other album sleeves by him.  Most of his regular work is fairly realistic in style, but here he has gone for a more unusual look, an impressionistic background and slicker foreground portrait, with crayon work overlaid.  A lot of male singers went for illustrations on their sleeves, to get away from the rather traditional photographic portraits perhaps (and maybe taking them home for their wall afterwards!). It’s likely to have been based on a photograph – the back cover has a photo of Trini sat near Nelson’s column. The album was issued in 1967. Guy painted throughout his life, and died in 2005. His Western painting are now quite collectable Stateside. 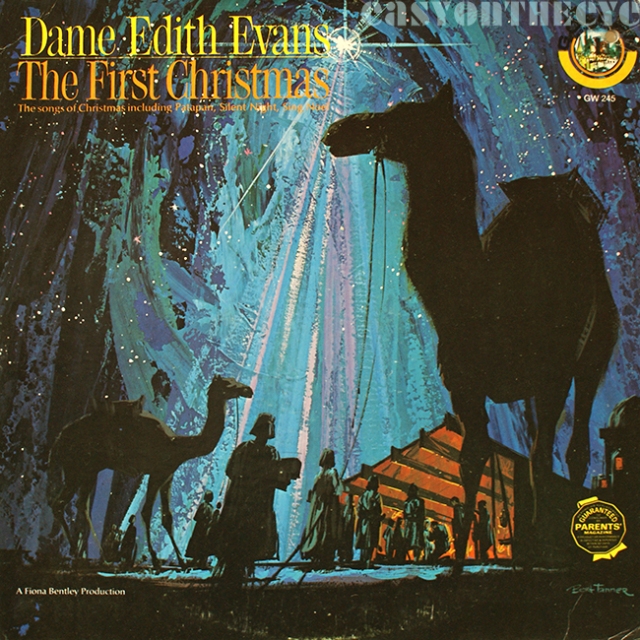 A really dramatic impressionistic angle on the fable of Jesus’ birth here, with artist Bert Tanner going for a moody blue palette with the camel in the foreground looming over the scene. It’s quite a contrast to the normally playful illustrations used on what was essentially a label aimed at children (or at least parents buying for children), you might have found this quite spooky as a child.
A little hard to date as the label appear to have kept albums on catalogue for years, with a generic back and no label info, but it could be from 1968 (going by others in the range which have been dated). Digging a little deeper into the content, it seems to be in part a record produced in the UK for HMV in 1959, and first released here as an EP. Dame Edith narrates the story, with a choir singing carols. An actress, she did a fair bit of this sort of work for spoken word albums, most notably for Caedmon.
Bert Tanner was a commercial illustrator who worked on a number of sci-fi book sleeves in the 1960s and 70s, but I’ve not been able to find out anything about him.

The eagle eyed might notice a fourth sleeve in our header photo, for an album called Pagan festival. This turned out to be a really interesting sleeve and artist, so I have covered it separately under the sleeve designers section.