A small collection of Christmas themed album sleeves for the winter season. A popular choice for presents especially in America, the covers had to entice impulse buyers and often belie their budget origins.

Scooby Doo and the Snowman Mystery / Music For Pleasure 1973 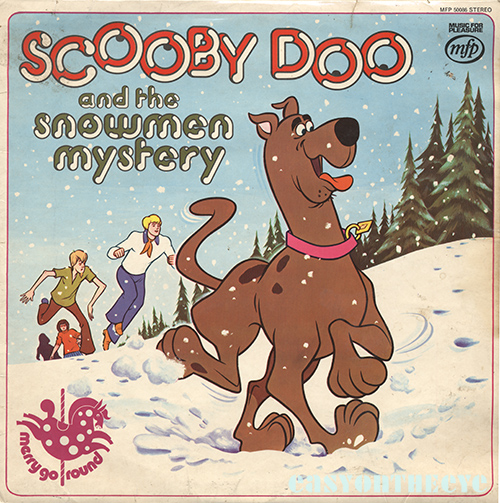 There were any number of stories based on the cartoon series issued as EPs in America (some of which came with story books built into the covers), and then rounded up on albums in the mid-1970s.
This British edition may consist of licensed in versions from America, but the sleeve notes imply a new recording, and the album also features a British producer (Barry Ainsworth. Five years before he’d worked on the debut album by Deep Purple!), so perhaps MFP’s children’s label decided to have a go over here on their Merry Go Round imprint in 1973.  It’s not exactly a Christmas release, the snowman in question being discovered while the crew are on an Alpine vacation, but I wouldn’t mind betting many kids found this in their pile of Christmas presents due to the wintery cover illustration by Hutchings.

This has long been one of my favourite Christmas album sleeves, although I can find out almost nothing about it. Put together by German label Teldec’s in-house designers, the photography is great. Snowdrifts with just one tree decoration on the front, and no typography at all. The back is another snowy landscape, this time with a clock set at midnight, and the track titles. The music is split, classical on disc one, popular on disc two, so something for everyone.
The cover is a gatefold, and the inside gets very tricksy. Twelve photographs of christmas trees and yuletide tables, but all perforated to punch out and use as postcards (with the backs printed for posting). Clearly a no expense spared project, maybe given to workers at the label, record shops and reps.

From the small specialist label Doric in California, which concentrated on organ music releases. Bill Langford we learn was the in-house organist at Ye Olde Pizza Joynt (sic) in San Lorenzo, which for some reason had rescued an old Wurlitzer organ from a San Francisco Theatre and installed it in the restaurant!  For the cover, Bill chose to have his four children around a very artificial looking tree. One suspects they looked upon this with some embarrassment a few years later, but it’s probably a family nostalgia piece today.

A real down-market budget offering on this Christmas themed offering from Canadian label Arc.  Performed by Ken Stanley & The Pubsters, the label title is actually “Christmas Is An English Pub” – although if so, who so many folk in Scottish dress? Goodness knows what the guy on the left is doing with his bowler hat and waistcoat. Still as the sleeve notes explain, “here in the pub everyone is equal, from the Mayor to the dustman.”
We’ve seen Arc albums on the site before, there’s a cheesy country album shown here. 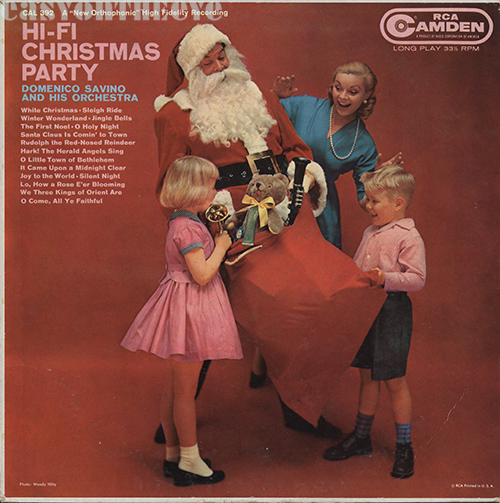 This is perhaps more typical of the many Christmas themed albums released in the long play era. To save printing costs, the back sleeve is generic with a list of catalogue titles, so it’s left to the cover image to sell the product. The studio photo is professional and very much of the era, with everything focused on the people thanks to the plain backdrop. The kids actually look quite natural, Mom and Dad (aka Santa) less so. Incidentally the teddy bear is credited – to Ideal Toys!  The photo is by Wendy Hilty. I’ve not been able to find out much about Hilty, but he (not a she!) was a commercial and portrait photographer for a number of clients. He came to America in the 1930s from his native Switzerland as a ski instructor, and had other business interests beside photography. Most of his sleeve photographs appear on RCA Victor albums from 1951 to 1961, though many more probably went uncredited. He died in 1978.

The fabulous Ann Pickford appears amidst the branches of these pine trees, decorating a Dutch produced Christmas collection, culled from the Philips Holland catalogue and featuring singers such as Jo Stafford, Rosemary Clooney and others. Pickford modelled for photographer Paul Huf on over two dozen classical albums on Philips Holland between 1956 and 1958, and became quite famous over there. I did a page of the classical sleeves featuring Pickford on the original Easy On The Eye website which can be seen here.
The cover is typical of Huf’s work, imaginative and unusual but very eye-catching.
This particular edition seems to have been produced specially for the American  Air Force Europe Exchange (Afex) a supply organisation for the bases across Europe and further afield during the 1950s and beyond, and carries their logo on the back.

Undated, but clearly from the 1960s, these two budget albums mine the same market as the Hi Fi Christmas title above. Again simple backs, with more product advertised, yet the fronts have better than expected photography courtesy B & J Kerr, and design by Aileen Hunt.  Both were released together for the North American and Canadian market.  A nice box of glass tree decorations for one, and a multiple exposure sequence of a hand bell on the other.  They were designed to sell for just under $5 Canadian. Released by the budget Palace record label, it’s interesting that despite the price they still felt it worth commissioning designers and photographers rather than falling back on stock images.

A great Christmas sleeve for James Last from an older page.