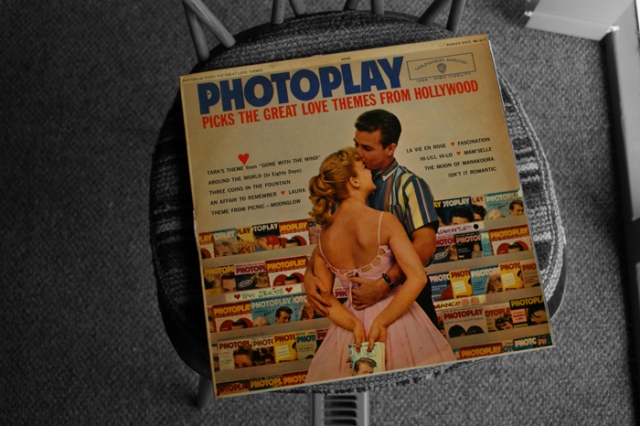 Photoplay Magazine dates back to 1912 in America, one of the first celebrity driven titles which I suppose has lead us inexorably over 100 years to the garish day-glo racks of Jordan-filled dross we have to hurry by in WHSmiths in order to avoid having our retinas burnt out. Photoplay had a good run too and only stopped publication Stateside in 1980. The title was launched in the UK in 1950 and lasted here until 1989.

This album, Photoplay Picks The Greatest Love Themes From Hollywood, was issued (at least in the UK) in 1960, and is an early vinyl example of what the business loves to call cross-marketing. The idea seems to have originated at Warners, who supposedly asked staff at Photoplay to choose Hollywood’s 12 Top Love Themes. “Warner Bros. Records has employed the talents of many different recordings artists,” added the notes on the back. Well yes they did, but not for this album. In reality it is a glorified compilation album, sourced from earlier soundtrack LPs.

The cover photo is great though, with the all-American couple (button down short-sleeved shirt for him, low backed prom dress for her) set against a fake newsrack stuffed with what would now be quite collectable copies of Photoplay. The photo was taken by Peter Samerjan, who did other cover work for Warners (including the 1957 shot for a Bob Cooper sleeve below) and images for a number of American magazines including TV Guide.

The Photoplay album is a British edition produced by Decca (a one piece cover with laminated front) under license, but still sports the really smart gold W.Bros label as seen in America.

If you want to see more of the Photoplay magazine covers, then there’s a strange website which has loads scanned in