Another non-vinyl (but still plastic!) pop artifact which I’ve always liked. I remember David Browne, working at a local newspaper in Brighton, telling me one of the younger designers there suddenly asked him one day, ‘what did you do before there were Macs?’. Taken aback, as far as I know David didn’t rail about the uselessness of an education system that neglected to include the history of hot-metal typesetting in the core-curiculum. I like to think he was able to point the young shaver at an old cardboard box full of brittle plastic Letraset sheets in the corner of the store room and said ‘That.’
As can be seen from references on a number of the ST33 pages, Letraset was an integral part of any design studio’s technique during the late 60s onwards (and remained so even into the late 80s despite the arrival of phototypesetting and then Macs). But the firm didn’t just do rub-down type. They also exploited their patents in other areas, and the Popstar Watchits is one. These were sub-A5 size Letraset sheets, printed with a host of pop star images which you could then rub-down onto loads of different surfaces. A handy guide on the reverse gave some suggestions – from headboards and fingernails to shoes and bags. Because Letraset was prone to flaking off at the slightest hint of flexing, they suggested you paint over the transfer with a coat of clear varnish… 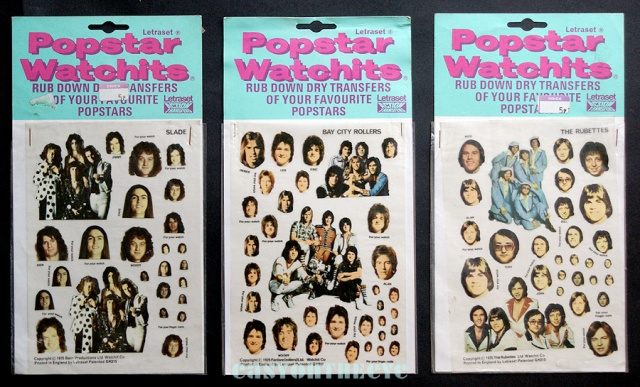 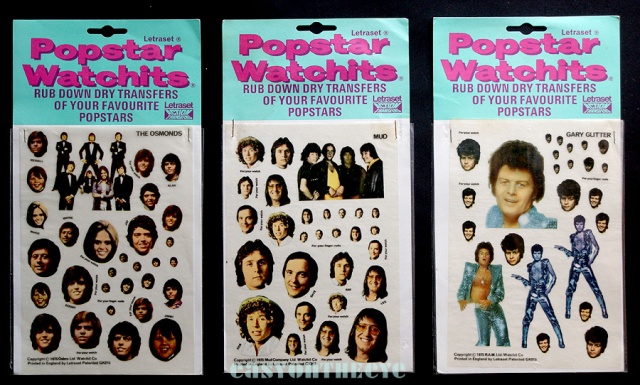 As far as I know they issued six different Watchit sets (the name coined because some of the images were designed to rub-down onto your watch face) in this particular range. As they came out in 1975 and were aimed at teeny-boppers, the acts covered included The Osmonds, Mud and so on. They’re great archive pieces from the time really. I picked some up years ago in a sale (the 5p price label is still on a few), and recently my brother Joe found the missing ones from the set for me.
And lets hope the clear varnish could be removed, otherwise some 50 year old women will be forever fearing their red nail varnish comes off to reveal Gary Glitter hiding underneath. 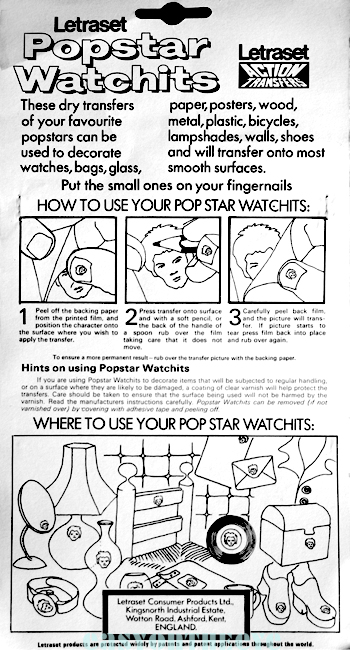