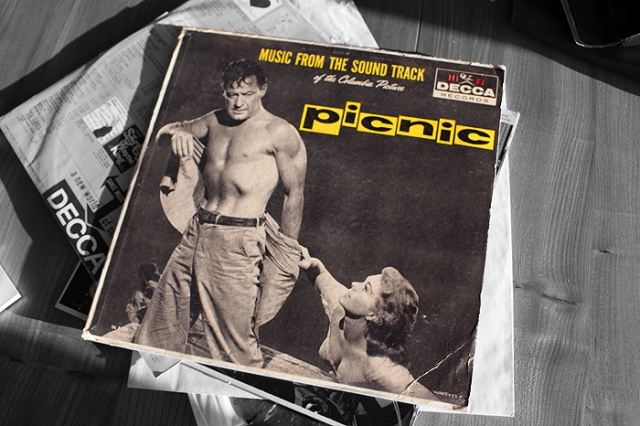 William Holden, a very popular and bankable post-war American actor, gave credible performances in a number of films but did not, as far as I know, possess much of a singing voice. Even so, like a number of TV and movie stars of the 50’s and 60’s (the example of William Shatner is a shining one), this proved no barrier to him appearing on album sleeves. Back then there were no video sales to count on and the album was one of the few ways a star could capitalise on his or her popularity. The two albums here are the inevitable soundtrack album, Picnic (co-starring the Goddess of Love, Kim Novak), and a strange world music offering.

The Picnic album is a great package in so many ways. We have the hunky beefcake image on the front for starters (with Holden sucking his stomach so far in you fear he might pass out), and more film stills on the back, albeit printed in very course screen size. Additional delights include the rainbow Decca label design, as well as the smart yellow and black record bag, featuring selections from the label’s back-catalogue, grouped by theme and sharp pointers.

The vintage Decca US logo is also worth a look, a sort of Harlequin figure holding a globe. As a bonus this sleeve still carries a sticker from the store which originally sold it, The Disc Shop in Washington DC – such snippets of printed ephemera are great to find. The film came out in America in 1955, so I assume the album is from thereabouts.

Decca America was a separate company to Decca UK by this time, having been sold off in 1939. 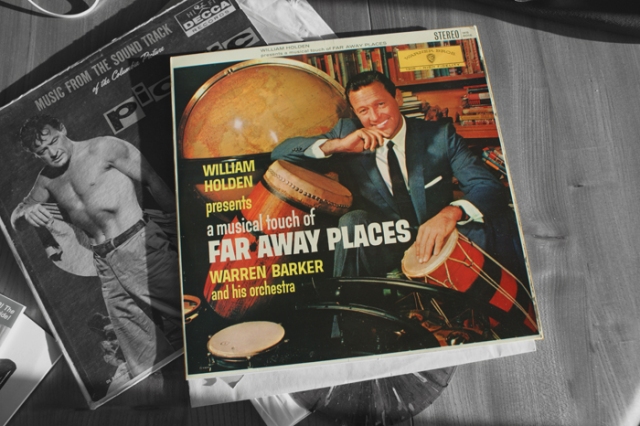 Trading more directly on Holden’s fan-base, Far Away Places features a shot of the actor, dressed very formally in suit and tie, surrounded by exotic bongo drums and a globe. If you thought he had hidden percussive talents, be prepared for disappointment. Holden’s involvement seems to have gone only as far as helping to choose the tracks and pen the detailed sleeve note. Otherwise it’s a typical exotic musical journey of the times, what we now tend to refer to as easy listening, but no less fun for that.

The studio portrait was taken by Hal Adams. Hal did other sleeve work (check this fabulous 50s Curtis Counce sleeve for example) but is perhaps best known today as one of the first photographers to work for Playboy magazine in the fifties, shooting a number of centrefold portraits (a gratuitous sample from 1957 is shown on this page).
Getting back to Far Away, this is a British edition in a laminated sleeve, but with the same deluxe looking bronze Warner Brothers label design as used Stateside. It was actually manufactured by Decca UK. The label has a production date of 1959 (Holden was in the Top Ten Stars of the Year six times around this period), though this edition might have trailed a few years behind.

One of Hal Adams' pin-up photographs from 1957