There are strange records out there, and then there are out-there records which are just strange. Hunting thru Audioland with Gin and Chimera clearly belongs amongst the latter. I first clapped eyes on this sleeve via an email from the Shelf Appeal web mistress (see the links list), who indicated it might be up my street and pointed me at the Smithsonian website in America for more information.
The trouble is that ST33 likes to concentrate on stuff we own rather than just lift stuff from other sites. We were left with no choice but to try and track a copy down. And that wasn’t easy, the web clearly being aware of the record, but few ever having seen it – though possibly official CD reissues and torrents abounded. Finally correspondence ensued with a dealer in Illinois who had an original copy for sale, but listed at less than mint and not illustrated. When I explained that the cover had to be in good condition he reported back that it was; the low grading mostly reflecting splits in the spine – a flaw which has never bothered me. $40 plus shipping changed hands (Christmas buying for my partner was sorted).
And it was indeed in lovely condition, clearly having been purchased by some amateur cinema buff for use on soundtracks, then stored nicely, so escaping the ring wear which often mars US sleeves (and would have ruined this gem).
The cover shot is just plain mad. I’ve seen cheesecake; I’ve seen covers showing off hi-fi kit. I even have covers with modern living room furniture on (cf: the page on this site about the Eames chair). Yet I’ve never seen a shot which brings together all of the above, and then throws in a puppet for good measure.
So we have a polka dot bikini-clad lass seemingly deep in conversation with an Alligator glove-puppet. Her modesty is hidden behind a three part fifties steel-trellis room divider, all circles and diagonals – and totally impractical as it hides nothing.
Lurking on the other side of the screen, crouched over a heavy duty reel-to-reel tape deck (which hopefully some hi-fi buff might be able to ID for us), a sound engineer twiddles with his knob, adjusts his leather clad headphone straps and holds up a microphone to capture … what exactly? A novelty ventriloquist act?

Turning to the details on the back sleeve provides no help whatsoever, beyond the explanation that this is a sound effects album of some sort. So it was off to the Smithsonian to see if they could provide any background.
In essence Cook Records was a one-person operation run by Emory Cook, who was obsessed with audio verite, recording ambient sounds across America for many years. The fruits of this labour were rounded up on dozens of sound effect albums, which clearly must have sold well enough to support his hobby. As well as these, he also released a couple of hi-fi demo records crammed with tips on what to look for when buying equipment, which promised to ‘save you hundreds of dollars’. When he died, his widow donated all his work to the Smithsonian.
I checked out more of the albums, and while all are fascinating to some degree, ‘Cook’s Tour Of High Fidelity’ seems to be a one-off – the rest of the sleeves being strange drawings and diagrams. Nor does this great cover give any credit to the photographer. Or his glamourous model.
The sleeve is the regular paper slick type. The album looked like a normal black vinyl pressing until you hold it up to the light, when a dark plum colour is clearly visible; doubtless all part of the “New Microfusion Process”. The album is sheathed in one of those shaped fifties polythene inserts, which has been sealed by a gold sticker to show that the record hadn’t been tampered with. Even the label is strange, overprinted with a gold ink which kind of fades out near the edge. 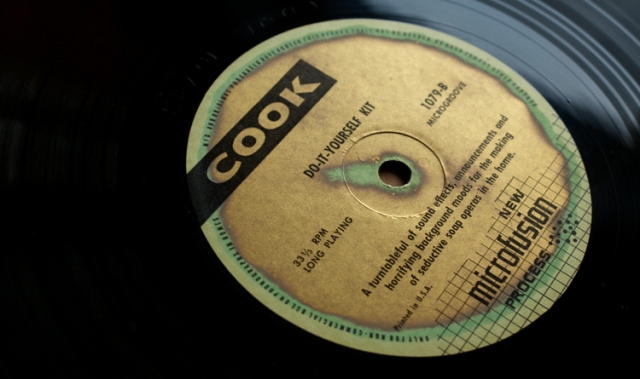 The only strange thing for an audio album is that the vinyl pressing quality is actually fairly poor, with pitting all across the surface. Unless these were all part of Emory’s plan to introduce random effects to the audio process…

1 Response to Gin and Chimera