UPDATE • The exhibition ran through into March 2013. I contacted the organisers to suggest it was time to take it down, only to be told “it’s already down, can you collect it?” Apparently the redevelopers had moved onto the site. They removed the framed prints, ripped off the sleeves (damaging many in the process) and trampled all over the banner so it was unusable. All the wooden frames I’d carefully made were left fixed to the wall. I dashed down but they’d already smashed everything up. All that on top of them never paying me the expenses for materials originally promised has soured me off no end.

ORIGINAL ARTICLE • The Sheffield sleeves display on The Moor (July 2012) has been drawing interest; the local daily paper picked up on the story and ran an article on July 26. which brought some interesting calls from local people that I will be following up. Radio Sheffield also mentioned it on July 30. but as I was away decided to interview someone else about it… bizarre. 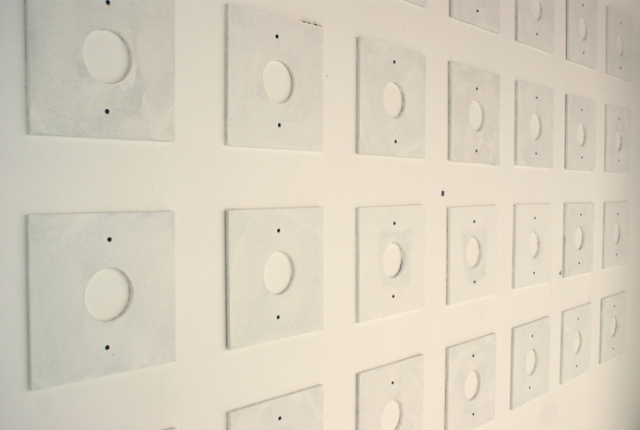 Anyhow, some shots of the finished display here to give an idea (sorry, a ‘sense’ © everyone on the BBC these days) of what it looks like. It’s interesting how the sleeves take on an almost abstract quality when grouped together like this, with the different shades of card.
Plans for a further display at another venue later in the year are developing. You can read the initial post about this display here.