In the world of sleeve design some covers have become instantly recognisable. It is rare for a whole series to achieve this but the BBC Sound Effects albums from the early seventies have such a strong visual identity that just a glimpse of the gridded covers lets you know what you are looking at. Indeed the sleeves have such status that they are now often collected by people who haven’t the slightest interest in the records inside, and the design has been awarded perhaps the ultimate accolade of being ‘borrowed’ more recently. 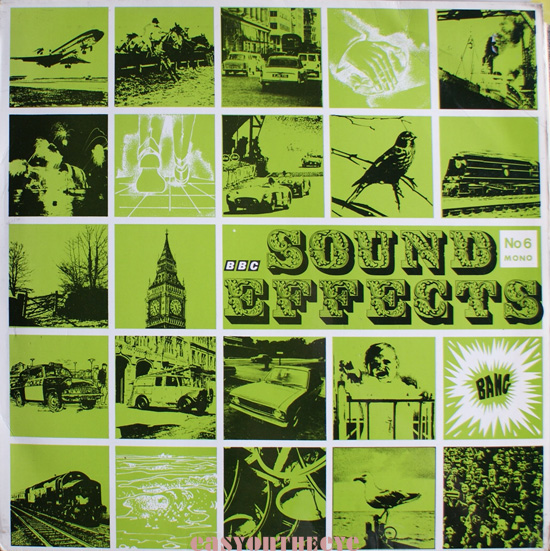 The Sound Effects records were always going to be for a niche market, collecting together a selection of dozens of short recorded sound effects (from the BBC’s own library of “approximately 6,000 recorded sounds”) for use by the public on amateur plays or home movies. The BBC’s record label had been set up to release tie-in albums for television and radio programmes, mostly educational and schools broadcasts. The BBC had issued sound effects records going back to at least 1967 but these had been in generic cut-out covers aimed at the professional market (and may only have been available via mail-order). The first Sound Effects album to be marketed more widely and via high street stores as well (titled No. 1, so they clearly planned a series) was issued in late 1969. It originally had an orange and green label, switching to a blue and white design. On the back was a list of effects and a detailed note on ways to incorporate them into your home movie or play.

The album cover design was by Roy Curtis-Bramwell, and used a 5 by 5 grid of square images culled from… well we’re not sure where. Most are very contrasty photographs, perhaps from the BBC’s own photo library (which they had at the time), with a handful of illustrations amongst them. One of these (of a Ford Anglia Police car) is signed by Barry Wilkinson and is very well drawn (Barry illustrated a number of the Paddington Bear books amongst others), the others are by a different hand, and less proficient .

The images on the top half are on an orange background, the bottom on blue, while the middle strip introduces a third colour to highlight the ornate Victorian uppercase font of the album title. Roy makes one exception for the comic book motif ‘BANG’, which adds the top colour to strengthen the neat little graphic. The four colour design was quickly reduced to three colours on No. 2, and by No.5 to two colours. Despite the BBC’s parsimony, the covers still looked good, and with all the colour variations make an attractive set. Roy was presumably paid for the original design but by No.5 his name had been dropped from the credits. No. 9 in 1973 saw the cover design altered, with a cleaner more modern font for the title, the letters inlaid with a radiating screen, and more emphasis on the BBC logo. To make room three of the photographs were taken off. It’s all a bit unbalanced compared to the original. The series seems to have halted in 1973, I have only seen nine using the original design. The albums were revamped in 1976 with new abstract sleeve photographs in full colour, which are not credited, though the original back text and copyright dates were retained (the new cover for No. 2 is shown below to compare with the original above). In this format there were at least 26 albums, which were often themed, as well as spin-offs. Today the original sleeves are much collected and turn up quite regularly with specialist dealers.

Roy also designed other sleeves for the label (including some great covers for a BBC Schools broadcast called Movement, Mime and Music – which one wag on his blog marvels that he’s amazed Stereolab haven’t yet stolen the idea yet!). The web throws up little more on Roy beyond an interest in the occult, but whether he did any sleeve designs outside the BBC we don’t know. He may have had an association with the BBC Radiophonic Workshop, as he co-wrote a book on the history of the department in 1983. He also wrote monographs for the Inter-City Research Press in the late 60s and early 70s (including an anti-BBC one called Blatant Bias Corporation). This fringe publisher looks to have had some very extremist people behind them at one time (I found links to Roy’s book on a couple of National Front archives for example), so haven’t delved any further.

It was in 1980 that Mod revivalists The Jam used the original BBC sleeve design as inspiration for their fifth album Sound Affects. This was a clever pastiche, with images carefully chosen to match those of the original, with many just being variations thereof, and even a vintage typeface (Profil) for the title. The concept came from the band, and was put together by Bill Smith at Polydor. He was art director for the label from 1976 to 1978 before setting up his own agency, and did all the Jam covers.