Bridlington, on the East Coast of England, has never been rich in record shops. Even as teenagers when we used to stay with relatives here, a trip to Hull (our Aunt lived there) was always a must for records in the very early 70s.

The only vinyl stockist left in Bridlington in recent times (apart from a few desultory left-overs in charity shops) has been Smugglers Records, on the Promenade. In most towns, the prom is actually on the seafront, but for some reason in Brid it’s a parallel shopping street. Much of Bridlington’s retail centre today has an air of neglect. Long the seaside destination of choice for much of Sheffield and South Yorkshire, it was always a little downmarket, but often cheerful. Today the empty stores and decaying buildings really cry out for some imaginative planning decisions (which judging from the bits of new-build that have gone up they’ll never get) and speculative restoration of stunning Victorian housing blocks.

Anyway, Smugglers opened back in 1986, and is a typical example of the classic seaside type of shop which appears to carry on regardless, the owner seemingly incapable of operating a hoover or exercising any rudimentary DIY skills. The shop had two rooms rammed with stock and a strange cubby hole office in which the owner sorted stock, chatted with his regulars and seemed to be ticking off the days to retirement. Even getting in the place was difficult with the doorway stuffed full of stock (see photo!).
The vinyl racks stretched out in a long annexe room but by late 2010 this had all been emptied, so my visits – admittedly made more in hope than expectation, though I did find bits and bobs over the years – will now cease. In truth the records had been crammed into conti-plas racks so tightly they were often hard to go through, or creased through years of people trying.
All that was left was just the main front room which is mostly CDs, old cassettes and a few boxes of vinyl which aren’t worth wasting time over. It’s worth a look – if only to see how not to run a record shop!
I last went by in early 2011 and the place was shut up (love the fading signs on the security shutters) with a notice that they’d be open again in the summer. They do have an internet ebay shop so perhaps everything is going that way (and their feedback is generally very good). You can’t blame them for joining so many others online, but it’s a shame they didn’t make the most of what they had shop-wise. So possibly open, more likely closed (the shutter was still down in May!), check it out before making a special trip. 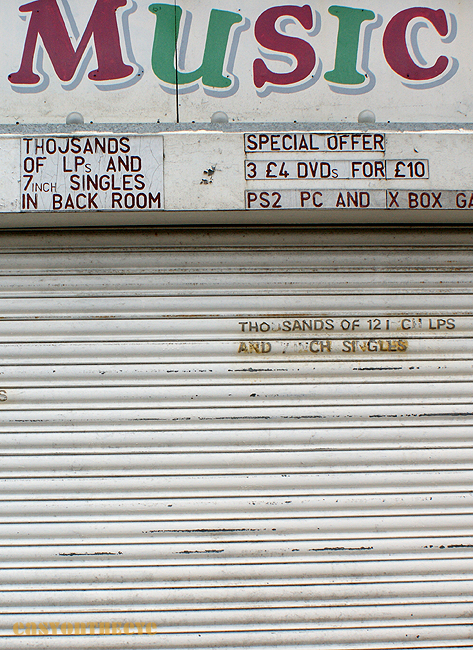