Long before the braying event which is Strictly, there was the more sedate Come Dancing show for fans of ballroom. And EPs were a popular vinyl format for proper dance music as they could be changed over easily in classes. They were often produced by specialist dance bands and labels (Sydney Thompson is one name which springs to mind). Polydor in Germany took the format up-market with a series of themed Im Strikten Tanz-Rhythmus 4-track dance EPs in the early sixties. 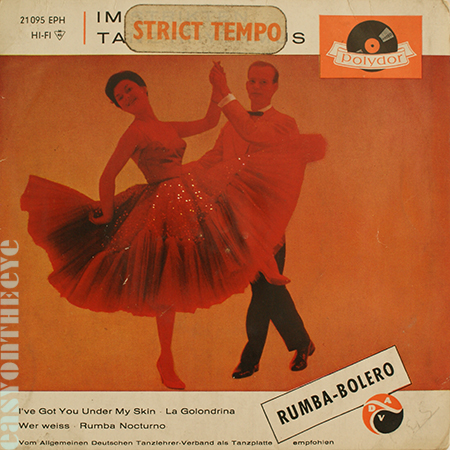 Copies were exported with English language labels stuck over the German ones (see above) before proper English covers were printed for the UK market. With the pastel colours and vintage ballroom frocks, the sleeves make a great collection. Nearly all the Polydor sleeves of this time – LP and EP – followed a similar layout; photograph in the centre, white bands top and bottom with the titles, and a large Polydor logo.
The music was mostly recorded by Horst Wende’s Dance orchestra and the series (which was ‘recommended by the German Dancing Teachers Association’) kicked off with nine EPs in October 1961, and grew over the next two years to 16 titles, apparently ending appropriately enough with The Twist in 1963. Most of the Strict Tempo Eps were issued in stereo and mono.
The covers (all printed in high-quality letterpress) all feature professional dancers, and most were shot in a photo studio (you can see the edge of the paper backdrop on the Quickstep cover), with the same couple turning up on some and even the same photograph. One of the sleeves I have has the price of 12/8d on the cover, expensive at the time. The ST33 gallery covers just the sleeves with couples on.

Polydor albums in a similar style, and links to more Polydor related articles on the site : http://wp.me/PNDz1-ik