Opened back in 1972, Our Price Records disappeared from UK high streets in 2004, a typical story of a strong brand being mishandled once it had been floated on the stock exchange in 1984 (the last foreign owner apparently spent £8million rebranding the chain, then realised people preferred the original name and tried to relaunch it, by which time it was close to collapse). They were at one time the biggest rivals to the HMV chain.
But here we have an ephemeral reminder of the shops, an Our Price branded ‘lost stock’ sleeve, printed in the red and black colours of the chain’s logo. Before shops began racking out records in sleeves, the discs were normally stored behind the counter. Sleeves sometimes went ‘walkies’; kids wanted them for their wall, or they might get damaged. These days of course such orphaned discs would just get binned, but back then shops used to sell them off at a discount. With 300 shops by the early 1990s, Our Price clearly had so many sleeveless discs that they decided to print a generic cover to house them. A small reminder of the day to day workings of a record shop. 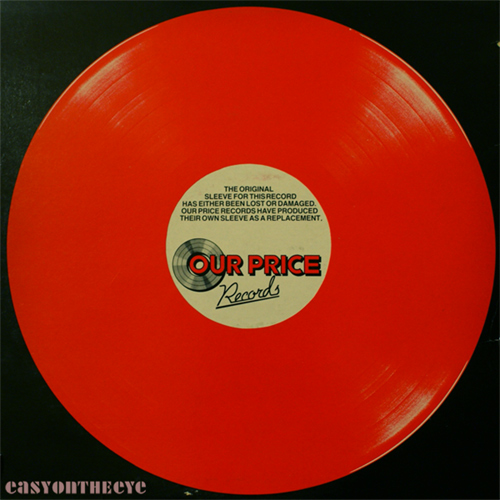 “Our Price Records have produced their own sleeve as a replacement” explained the back cover. They even added on the sticker that the sale price included the cost of this special Our Price sleeve!
The coda to the story is that having walked off with the sleeve, the patient but poverty stricken music fan would wait for the sleeveless disc to turn up cheap in a bargain rack and be able to reunite it with the sleeve.
I’ve since found the same sleeve in reversed colours, and a couple more such covers, which are on page two.
Our Price also produced a similar cover for 12″ singles, which enabled them to give customers information about the disc inside. I found a snap of one of these on the web. 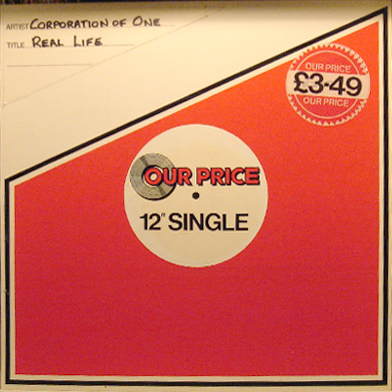 2 Responses to Our Price Records sleeve