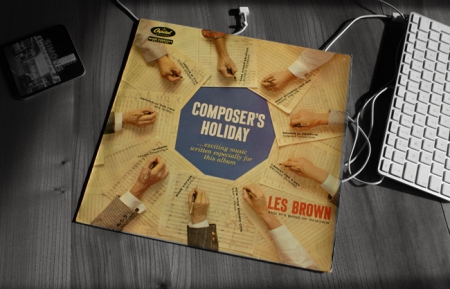 Here because it’s a great sleeve and I just found it in a charity shop in Bridlington.

The rationale for the record is that each of band leader Les Brown’s friends would write a new piece especially for the album – a sort of busman’s holiday. Les Brown had a long musical career, forming his ‘Band Of Renown’ in 1938 and playing with them through almost until his death in 2001.

Capitol often went to town on their album covers in the 50s and 60s, and this shot was taken by photographer Philip March. The photographer has gathered the sheet music for each of the tracks and then done a shot from above, with each of the hands clutching the same model of fountain pen (a job lot from a local stationers?).

I’m not quite sure why the designer didn’t also add Les Brown’s name to the central area with the title, it gets a bit lost down on the right. Doing that and putting the Capitol logo in the centre would have made it nigh on perfect (se the hasty remix below!), but the rigid house style dictated the position of the label logo at the top come what may. The back is nicely done too; little sketches, graphics and cartoons to illustrate each song title and a paragraph or two about the composition.

Overall then, a very smart cover and one which doesn’t really look to date from as early as 1957 (which is when the record was first released in America). This is a laminated British copy on EMI from around the same time.