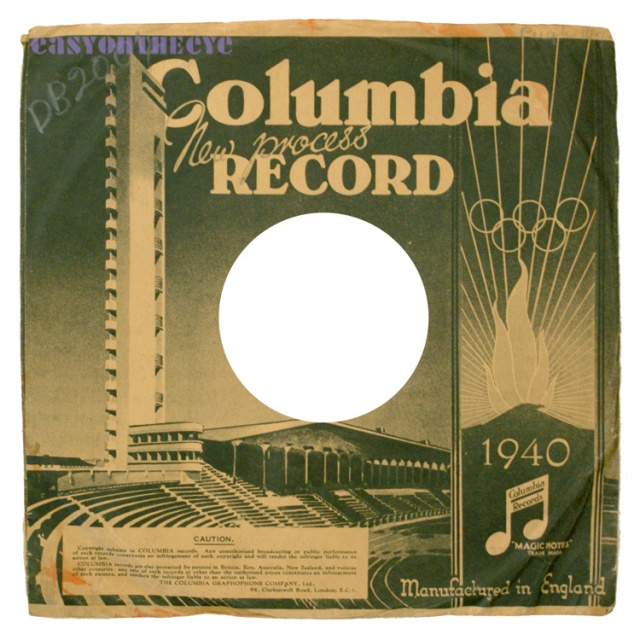 Costs aside, the 2012 Olympics certainly provided plenty of TV entertainment. And tie-in products. Coincidentally I found the 78 rpm Columbia Records sleeve shown here only this week at a market stall, complete with the Olympic logo and the date 1940. Even my limited knowledge of sporting history encompassed the fact that the Olympics was cancelled due to the War. £1.00 changed hands and I looked into the history of the 1940 games.
Originally the event was to be hosted by Tokyo but this was overturned by the Olympic committee in 1938 after Japan launched the Sino-Japanese conflict. Posters and other designs for the cancelled Tokyo games exist, showing that they must have planned well in advance.
The games were instead awarded to Finland, who had already built an Olympic level stadium in order to be able to bid for the games. Opened in 1938, it was ready for the relocated 1940 games. Advance publicity was begun but with the outbreak of war in 1939 the games were cancelled.
This British Columbia record bag actually shows the brand new stadium in Helsinki and yes, the tower really does look like that. I can only think that during the build up to the games in early 1939, Columbia decided to design a sleeve to tie in and gain some kudos from the very modern looking building. The fact that they don’t have to mention Finland by name indicates that there was already a good deal of publicity surrounding the 1940 games. One assumes that with the cancellation later that year, the sleeves were quickly dropped.

The stadium was designed by architects Yrjö Lindegren and Toivo Jäntti in a modernist style, and finally got to be used for the Olympic Games in 1952. And it still stands today, with the whole stadium having been renovated and brought up to current seating standards in the 1990s.