Decca Fullschrift • From the catalogue number this dates from around 1966 / 7. A lot of releases on this series had picture covers, but some light orchestral and others were housed in this charming generic bag with a list of other available Eps on the back (including, worryingly, Volume 58 of Hello Switzerland!).
I cannot find out anything about the illustrator Tibor (beyond ruling out Tibor Reich and others). The name, in italic capitals, does appear on some Decca album sleeves from the mid-1950s. This cover would seem to be more fifties, so was probably used for a number of years.
Füllschrift by the way was the brand name for a method of cuttings grooves closer together to get more music on a 45, and was developed by a German Teldec engineer in the early 1950s (originally so they could produce a record smaller than a 7″ and thus save plastic). I found this early bag on a site about the history of the process. 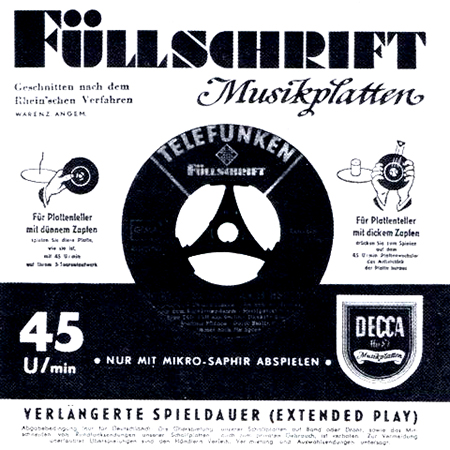