The 12″ single appeared in 1975, a promotional only format for disc jockeys, the wider grooves giving better range and volume in discos. In 1976 12″ releases were also sold to the public. Thanks to techno, drum and bass and other more esoteric genres, the 12″ single continues to be a popular format.

The generic sleeves used for many disco and dance 12″ singles reflect the musical style or the pretensions of the label. Labels would use the cover for a few years then move on to a new design. Many 12″ singles were issued on colour vinyl, a fact reflected in the Capitol sleeve. The covers often featured elements of vinyl or record decks, as in the Elektra and Gordy images. Numerous covers went for an illustration or graphic with dancers, shoes, legs, etc. as on the Ensign and RCA sleeves. The latter is the only one here to be credited, to Jean Marie Troillard. 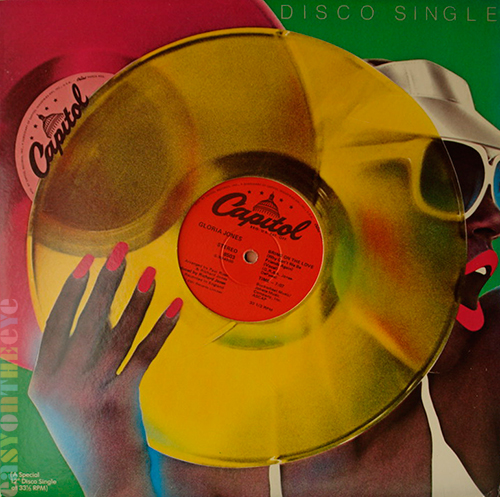 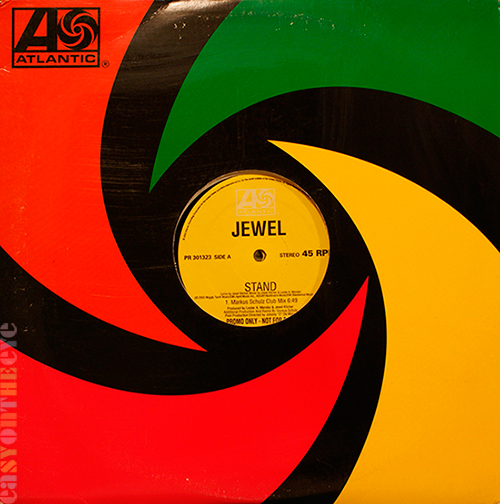 Atlantic : a sleeve made to house 12″ promotional pressings. 2003

The Sugarhill sleeve looks like it was done by someone in the office but manages to keep that street feel because of it. The RCA cover is one of several to incorporate the old ballroom dance move instructions into the minimalist illustration, and works well. Note the little snippet of 1940s style glamour.
MCA opt for the use of starburst riddled pictures from inside a disco, but overall thanks to some interesting cropping the montage looks the business. Motown’s Gordy label sleeve is really busy, with a central motif of a disco deck, headphones and mic. centred on logos from many of their spin-off labels of the era which slightly kills it.
Ensign go back to the dance moves and the overall image is great. Interesting how the Ensign logo echoes the later Virgin one too. Elektra go for a much cooler look with the cut out letters photographed showing a slab of vinyl beneath. When an actual disc is inserted the whole thing give a kind of tromp l’oeil effect.
Capitol also put some effort into their cover, which is probably a black and white photograph coloured up, not unlike the covers of Warhol’s Interview magazine at the time.
Lastly Atlantic, who simply enlarge a section of their original swirl logo to give a really striking cover.