Record shopping in Tokyo – Vince Kelly
I have fantasised about going to Tokyo for such a long time so to get the chance to go there was a dream come true for me. I did as much research/googling as possible online before going out to Japan but to be honest there really isn’t a lot of useful info available on the wonder web. Any info I found online was either out of date or referred to twee records – not much good if you’re a ambientdubtechnofiend like me! I talked to the boys in Eastern Bloc in Manchester before I went and they gave me a few tips which were useful but I really had no idea what to expect.
I was very lucky to find myself booked into a plush hotel in the Yotsuya, Shinjuku area, for as far as I’m concerned you cannot beat this area of Tokyo for culture, shops, food, and DISK UNION – yes it’s worth shouting about, because it’s the best record shopping experience I have had (anywhere) in more than 30 years of collecting records. I mainly stayed around the Shinjuku area because it was so good but did venture out later to explore the different areas of Tokyo via the underground system, worth doing just to have an amazing day out.
Disk Union itself was established back in 1973, and seems to be a sprawling network of a Japanese chain store specialising in second hand vinyl, with a really tall narrow store over some five floors (see the main picture) and several other shops close by – check out the store’s own map: http://diskunion.net/st/shop/e_index.html
The best thing about Disk Union is that they catered for all tastes, so I picked up fantastic finds such as: Earth – Legacy Of Dissolution, Oracy – Rewound, Monolake – Atlas (T++ Remix), all shown below, and more (plus some Japanese rock vinyl for Simon because I knew he would like them – it turned out he’d designed the sleeve for one, though he hadn’t seen the Japanese edition!).

After work, I spent about three days of my own time doing areas of the Disk Union experience and wasn’t until the last day I tried the Soul/Funk/Jazz basement. I’m not exaggerating; I really for the first time in my life forgot how to breath, I was so overwhelmed by what I found. I don’t know about you but I frequently have dreams about going in a record shop and finding everything I would hope to find in the racks. It really was my dream come true! I totally wigged out and went into some kind of record-shopping seizure. Every Sun Ra record, funk record and northern/modern soul obscurity was there in the racks, ready to be frottaged by your grubby mitts  (Frottage? I would interpret this as ‘record collector rubbing records’, just to avoid any confusion!). Guess what, I walked out of the record shop in a daze without buying anything because I was so blown away by the stock.
Tokyo is a great place for a holiday but to be honest I could have spent the whole time in the record shops because they were so good. I did get the impression that all the good stuff has been bought up by Japanese buyers in the UK and USA and shipped back out to Japan. I would love to go back with friends for a holiday because I just kept thinking about how much they would have also enjoyed the experience.  Toodle Pip. 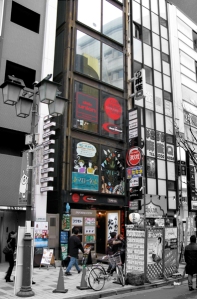 Bringing up new stock from the basement...

Vince Kelly was the driving force behind the wonderful exhibition of Easy Listening album art we did some years ago at the art gallery in Blackpool.