WILSON PECK, “the home of music”, would seem to hold the honour of being Sheffield’s longest running record shop. It was open for business by 1896, and the two founders – Arthur Wilson (a pseudonym) and John Peck – had been in business selling pianos for some years before this. 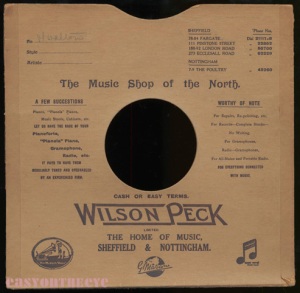 They established a big retail shop on Pinstone Street, right opposite the town hall, now occupied by Barclays Bank, which they named Beethoven House. Traces of a large painted advert for the shop’s original occupiers can still be seen in the alleyway left of the shop. Their business was described as pianoforte, harmonium and American organ merchants, tuners and repairers, as well as sole agents for Bechstein pianos. And they also sold 78 rpm records and sheet music. 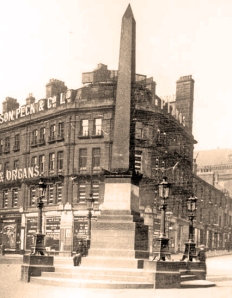 This is the original shop, now Barclays Bank

When I were a lad the firm had moved round the corner to an equally impressive store (also named Beethoven House) at the junction of Leopold Street and Barker’s Pool (as well as opening smaller shops elsewhere in the city and one in Nottingham).
Curving round the corner of the two streets the store had big ground floor windows and a large neon-lit sign which dominated the block.  A 1956 advert claims the shop to be “the place to go for everything musical: Pianos, Television, Radio, Radiograms, Records, Concert Tickets, etc.” Rooms upstairs would be hired out by piano teachers who gave lessons.
The record section was in the basement, with listening booths and the ticket counter. To ensure a ticket for the bigger shows, you had to find out when they were going on sale and queue up, sometimes overnight (26 hours to get tickets for Bob Dylan at Earls Court in 1978 was one fan’s record!). 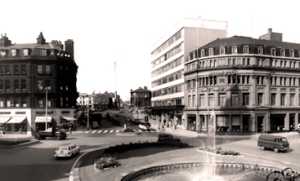 This shows the new shop on the left, with the location of the original shop on the right (Timpson Shoes at this time)

Pianos and, in later years, organs and other modern keyboards were sold on the ground floor (saved having to carry them upstairs I suppose!), other instruments and sheet music on the first floor.
Today the former Wilson Peck building is the last survivor of the old block, but when they moved out the developers just kept the facade and ripped out the original interior and destroyed the landmark sign. Jewellers H.L. Brown moved in when in 1988 Wilson Peck moved to a more modest shop on Rockingham Gate. They stopped selling records, so I had no reason to ever go in! After a few years this store also shut and they moved right out of town to an end-of-terrace corner shop on Abbeydale Road (quite a sad sight to see if you’d known the city centre store in it’s prime), eventually closing for good in 2001 on the retirement of the then owner. 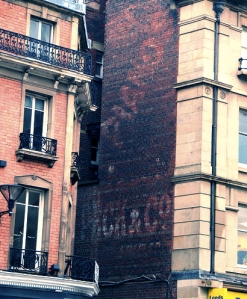 I’d love to hear from anyone who worked in the store, or who has interior pictures, or even if you have memories of buying records there. 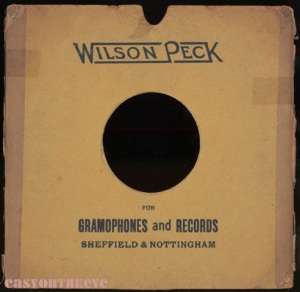 a later 78rpm bag used in the Sheffield and Nottingham branches

You can see more images on the entry in the Sheffield A-Z of record shops.