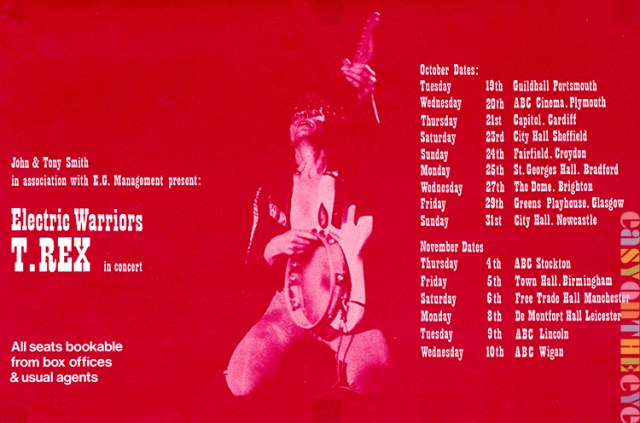 I used to grab bundles of the flyers from our local record shop counters back in the 1970s, and managed to stash most of them away in a box which has made it across several lofts. They also served me as writing paper for many years in the days when this was how people communicated!  I am now trying to make some sense of them all with the idea of a book.  I’ve always loved paper ephemera and at the time it was impossible to get the actual posters as these were always pasted up around town, so the flyers were the next best thing (and took up a lot less room). There are hundreds in the box and they provoke a lot of memories about the music scene at the time, as well as the gigs I actually went to, and the queues for tickets at the box office.  T. Rex were one of those groups most of us at school regarded as somewhat too teeny bopper-ish to be seen going to back then, but this is still a great flyer.  It’s A5 and printed on matt paper with just one deep red colour, and includes all the dates on the 1971 tour. The serif typeface is not what you might expect but does work quite well.  The promoters must have printed several thousand of these to be distributed around the country, although I’ve no idea how that was organised (possibly via the same company who stuck up the posters?).

Having worked as a graphic designer in the music industry, mainly in the reissue sector, I now concentrate on the design and publication of books about popular culture - and even write some of them.
View all posts by simon robinson →
This entry was posted in Uncategorized and tagged 1971, concert flyer, Electric Warriors, sheffield, T. Rex. Bookmark the permalink.