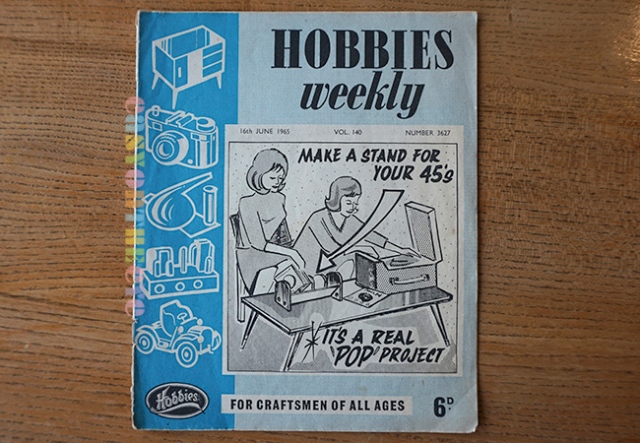 You’d need to be in your Sixties to remember the Hobbies model shops.  I was taken to their Sheffield branch from time to time by my Father who was quite skilled when it came to making things, though with me it was mainly to look at their range of plastic and balsa model kits (I still have the model of the R101 airship made by Frog kits we got their).  But Hobbies offered no end of arguably more practical projects, plus the materials and tools to build them. This issue of their weekly magazine offers plans for a small sailing boat, home built radios, sink drainage boards and a tea cosy!  Not forgetting a saucy photo of Miss Blackpool on the inside cover, the excuse being how to shoot black and white film in the summer.  But I liked this issue (No. 3627, which my brother Joe sent up to me) for the DIY 45 rpm record stand, to hold your very own ‘pick of the pops’. It was after right in the middle of the 1960s and times they were a changing. This practical little project is described over just one page, a simple build which if done correctly ends up looking something like the (rather ropey) illustration on the cover.  I suspect most teenagers preferred the gaudy plastic and wire versions sold in record shop, Boots and Woolworths.  Sadly for the fret workers of Britain the magazine (founded in 1895) closed the same year, and the chain of Hobbies model shops itself went under shortly afterwards (although in Sheffield the name was kept going by an independent model shop who catered for the wooden model aircraft and boat hobbyist into the early 1980s). It looks as if someone still owns the brand name, and operates a web shop service to modellers worldwide from Norwich, which is where the firm were originally based.

Having worked as a graphic designer in the music industry, mainly in the reissue sector, I now concentrate on the design and publication of books about popular culture - and even write some of them.
View all posts by simon robinson →
This entry was posted in 7" single, Accessories and tagged 1965, 45 rpm, build your own, Hobbies, record rack, woodwork. Bookmark the permalink.