One trade associated with vinyl which did die out in the Eighties was the discounted singles market.  Back in the Sixties some wholesale traders realised that with huge pressing numbers in pop singles, record labels would inevitably get stuck with excess stock from time to time. So they set up a network selling this stock to newsagents and similar smaller shops who wouldn’t normally sell vinyl. The best known was a company called Pop-Ex, who had metal racks made up and thrown away all original packaging and stuck the singles into their own Pop Ex bags. They would typically sell for half the price of a regular single. But a few other firms came and went, as these two wholesalers’ bags from the Sixties show. A big source of this cheap stock were jukeboxes, and the firms would collect discs as they were being removed from these and sell them on. In this case buyers had to watch out for wear and tear! Some of the bags do own up to where the records have come from. Lastly there were deletions, although at the time many singles were kept on catalogue for several years. However I do recall EMI sending round monthly sheets of records they were deleting even in the early 1980s.

This inspired me to dig through some similar offerings and I realised Supermark must have been going for some time. I would think the name explains all, and they pushed wholesale stock into the many smaller supermarket type shops which existed on the high street in the Sixties before the big boys decided to go for the mega stores. Note the price difference too, and the way the blue bag copies the Topline idea of listed the big name artists round the centre. I suspect the 2/11 is the later price.

Finally Pop Ex had a few different designs over the years, but this is one of the last, probably from the early Eighties.  Needless to say the decline of vinyl singles in that decade brought an end to this trade.  I certainly don’t recall anyone selling on CD singles in the same sort of way! 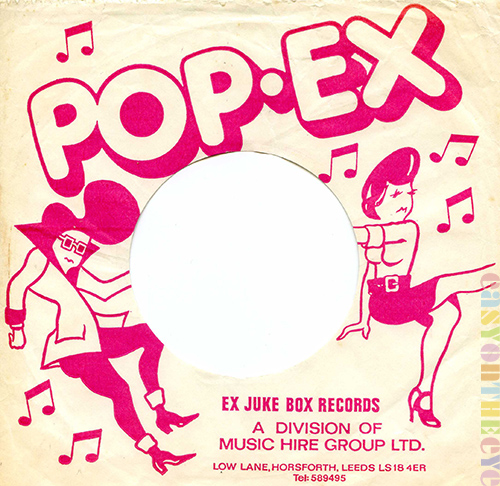 Having worked as a graphic designer in the music industry, mainly in the reissue sector, I now concentrate on the design and publication of books about popular culture - and even write some of them.
View all posts by simon robinson →
This entry was posted in 7" single, Crate Digging and tagged discount singles, ex jukebox, Pop Ex, Supermark, Topline. Bookmark the permalink.