Weekend – For all the family

Weekend Magazine was published in Britain during the Fifties and Sixties, a tabloid size illustrated title with lots of photos, glamour, stories, showbiz news and other entertainment. It also had full colour on the cover (often a pretty girl or starlet) and sometimes inside. The magazine was owned by the same company who published The Daily Mail, and they have kept the title in-house but now use it for their weekend newspaper magazine supplement rather than a stand alone.

Although bought mostly by adults, lots of teenage children also read it. Because of the youth angle, the magazine negotiated for the rights to three pop interviews which they made available to readers via a coupon in the magazine, plus a 2/- postal order , and pressed on 6″ hard vinyl singles. These appeared in 1956 and 1957, featuring Elvis Presley, Frankie Vaughan and lastly Tommy Steele. Tommy is less well remembered these days but his influence on a generation of would be British pop musicians should not be overlooked. June Norris from Parson Cross, one of the large pre-War council estates in Sheffield, sent off her P.O. and kept the single in it’s postal envelope for safety for sixty years, until it ended up in a local charity shop.

The only graphics are the label itself, which included the magazine masthead, and the bright red and black design which is very much of the time. The Frankie Vaughan single had a similar design, while the earlier Elvis one was much more basic. As you can see in the close up the vinyl pressing is fairly crude, and single sided, so you probably don’t get much for your two bob! 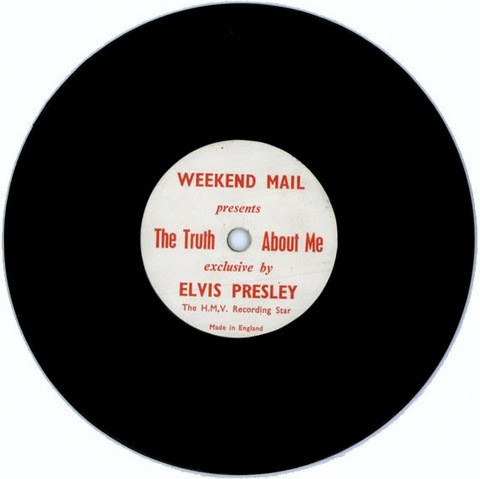 Having worked as a graphic designer in the music industry, mainly in the reissue sector, I now concentrate on the design and publication of books about popular culture - and even write some of them.
View all posts by simon robinson →
This entry was posted in 7" single, Crate Digging and tagged 1957, 6", Design, Elvis Presley, label, Mail, single, The Truth About Me, Tommy Steele, UK, Weekend. Magazine. Bookmark the permalink.