Inevitably we’ve been thinking about David Bowie today. I was never an obsessive along the Bowiemania lines, a heading which cropped up in the music papers during by youth,  but remain a big admirer of his output.  One of my favourite tracks by him without doubt is Ashes To Ashes issued back in 1980.  Needless to say Bowie was an artist who paid a lot of attention to his sleeve art and worked with interesting people throughout his career (his last album was done by another of my favourite graphic designers, Jonathan Barnbrook)

The 45 rpm single sleeve was based on photographs taken during the video shoot for the track, dressed in a Pierrot outfit, by Brian Duffy, who had worked on covers for Bowie before.  There is no actual credit for the design on my copy of the single (the back of which is shown below), but I assume it was by Bowie and Edward Bell, who did the Scary Monsters sleeve. The hand-drawn lettering is very impressive, a hard trick to carry off properly. 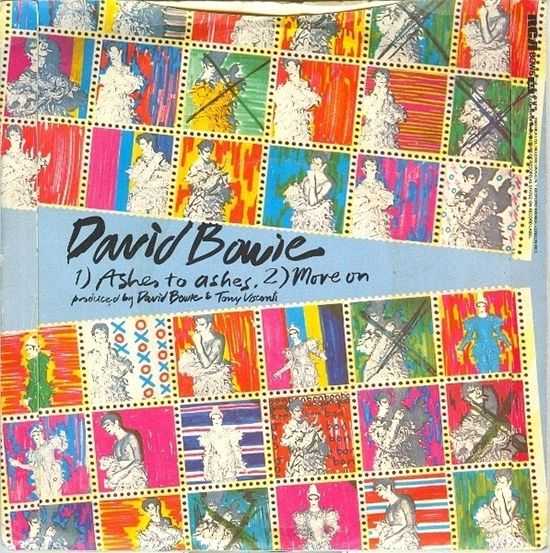 As well as the photograph and the lettering, the single sleeve makes use of a series of ‘stamps’, each seeming to use a sketchy visual for the album project, though they may just have been done en masse for this cover.  The UK press adverts (below) for the single credit the artwork to Bowie himself, so it seems likely he did the stamps.  I didn’t realise that they issued three variations of the cover (shown above), each with a slightly different version of the cover shot.  In addition, the first 100,000 copies also included a sheet of the stamps (below), with four sets available.  No wonder RCA could afford to spend some money on packaging with sales figures like that.

But then this was the era of collecting vinyl, and fans thought nothing of buying multiple versions of a single to get the set, and I’m sure I would have wanted the lot too (as someone who got all six versions of the Andy Warhol Debbie Harry album cover – albeit cheap US cut-outs).
And for Bowie, this was just one single, from one album.

Having worked as a graphic designer in the music industry, mainly in the reissue sector, I now concentrate on the design and publication of books about popular culture - and even write some of them.
View all posts by simon robinson →
This entry was posted in 7" single, Sleeve Designers and tagged 1980, 7", Ashes To Ashes, Brian Duffy, david bowie, sleeve design. Bookmark the permalink.

3 Responses to Ashes To Ashes