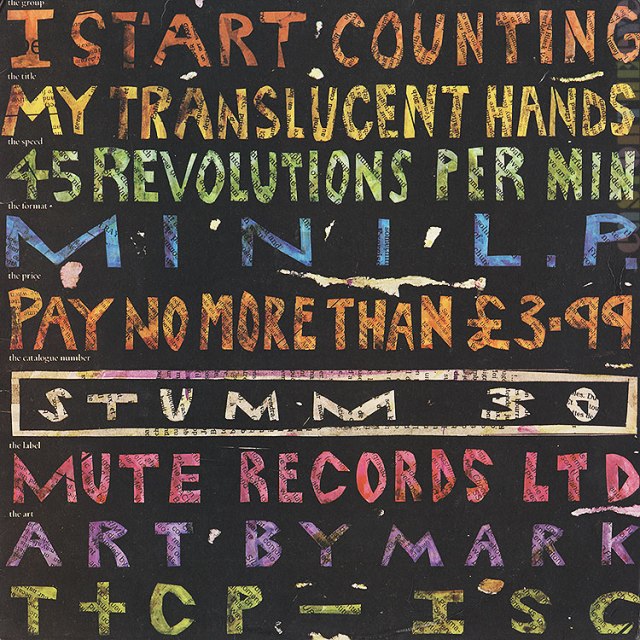 This sleeve plays with the conventions of an album cover and stood out in a rack of bargain vinyl I leafed through recently.  I’d not heard of the band, an electronic synth pop duo called I Start Counting, but this was their debut album from 1986 on Mute Records. The label had only been going a couple of years at the time but had signed artists like Depeche Mode, Yazoo and Erasure so could afford to be creative with packaging new acts.  Mute often did interesting sleeves, and this is no exception. I thought it was a 12″ single at first, but they call it a mini LP; at around 34 minutes it’s as long as a lot of regular vinyl albums.  The letters are all made from shapes cut out of magazine pages which have been given a colour wash with paint first, then pasted up to make the final design.  The art even includes the retail price at a time when label or bands tried to ensure fans were not overpriced for a record they may well have taken a reduced royalty on to hit the lower price break (otherwise shops were tempted to try and charge more).  The album is called My Translucent Hands and is pressed in clear vinyl as a play on this. Although I don’t have it, the CD cover –  the format was fairly new at the time – uses the same design but with CD where Mini LP is on the vinyl.

The cover designer looked to be a bit of a mystery; “Art by Mark” didn’t offer many clues. Yet a bit of research showed this to be Mark Higenbottam, designer at Town & Country Planning Design, who did quite a lot of work for Mute. T&CP were later taken over by Stylorouge, an agency responsible for many very stylish sleeves (there is a review of their book on the site).  The back cover is less griping, black with just a few torn shapes and small montage in the corner.

Having worked as a graphic designer in the music industry, mainly in the reissue sector, I now concentrate on the design and publication of books about popular culture - and even write some of them.
View all posts by simon robinson →
This entry was posted in coloured vinyl and tagged album sleeve, I Start Counting, Mark Higenbottam, Mute Records, Stylorouge. Bookmark the permalink.