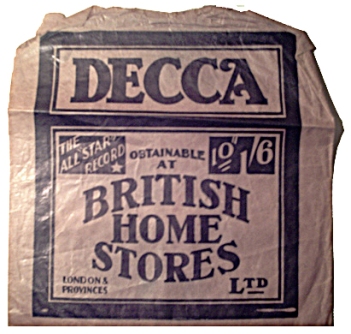 Happily the apathy from local arts organisations about popular culture exhibitions in Sheffield isn’t reflected everywhere (you’ll have to excuse my grump – two years running now I’ve been up for doing a sleeve art display for the Sensoria music event here, and two years running they’ve been all up for it – and then ignored all subsequent emails until it was physically too late to do anything!).
So it was good to learn that Rough Trade Records in London is putting on a display of old record store bags to mark Record Store Day throughout April. The display has been organised by Leon who runs a site devoted to collecting information on record stores, and has a website up and running. The exhibition even got a mention in the current issue of Uncut magazine.
Anyhow, you can have a potter round the site by following the link to British Record Shop Archive. And it’s somehow comforting to know that I’m not the only one who has peeled off a record shop price label to keep and thrown the album away.
I’ve chosen a great old British Home Stores bag from his collection to show here. I think the chain still have a branch open in town but not sure I can ever recall them selling records…

Having worked as a graphic designer in the music industry, mainly in the reissue sector, I now concentrate on the design and publication of books about popular culture - and even write some of them.
View all posts by simon robinson →
This entry was posted in record shop bags and tagged british home stores, record shop, shop, vintage. Bookmark the permalink.