The book Last Shop Standing by Graham Jones took a look at the vanishing record stores in Britain, talking to owners current and ex. Published in 2009 it was a hit with readers, a piece of research which was done at exactly the right moment. That it was so popular showed how deeply the memories of high street record shops went with some people.
Now on the back of the success of the book, Graham is producing a documentary covering the story. For this he has been back out to film interviews with shop managers past and present and it looks like being a must-see hour long programme. The plan is to screen it at several music festivals this summer. It’s a budget production, funded by the public through Indiegogo, but they plan to punt it round film festivals later in the year. Everyone who subscribed to help production gets a copy on DVD, which will be released officially in September.
Graham, who we know through his work with record distributors Proper Music, put out a plea for memorabilia earlier this year, so I mentioned to him that easy on the eye had a box full of record shop bags old and new.
I stuck the camera onto the tripod and just snapped the whole lot one afternoon recently and sent Graham a zip file with about 70 shots in. They hope to feature some in the film and the site will get an on-screen credit – which will be a first for me!
Anyhow, go and look at the link and see what the film is all about. 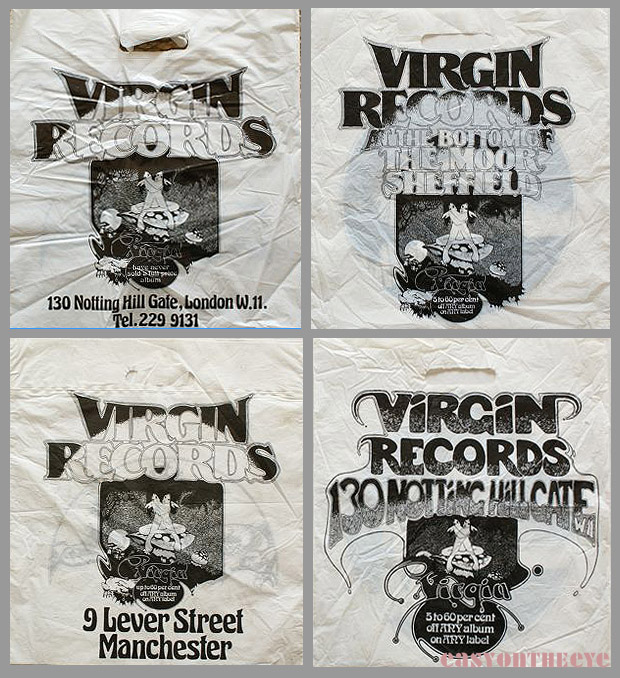 I will sort out the bags for the site over time, but to get things started here are four from Virgin Records. These are all quite early, around 1972-1975. The two on the right are older, and feature the companies mantra of “5% – 60% off every album”. The two on the left are a bit later, with the same basic design but the address is more legible. The old Roger Dean imagery was dropped after this.
It must have been early days for plastic bags too, as the ink used to come off after you’d carried them around for a bit. There was certainly a bit of a rebellious cachet as teenagers to be seen walking round with a Virgin carrier bag, just seeing the name was enough to stir up some people. It’s probably why I kept them longer than others, and they then became artifacts which I deemed worth hanging onto for the memories they brought back.
Check out our piece on Sheffield’s Virgin shop.

Having worked as a graphic designer in the music industry, mainly in the reissue sector, I now concentrate on the design and publication of books about popular culture - and even write some of them.
View all posts by simon robinson →
This entry was posted in record shop bags and tagged last shop standing, manchester, sheffield, shop, virgin records. Bookmark the permalink.