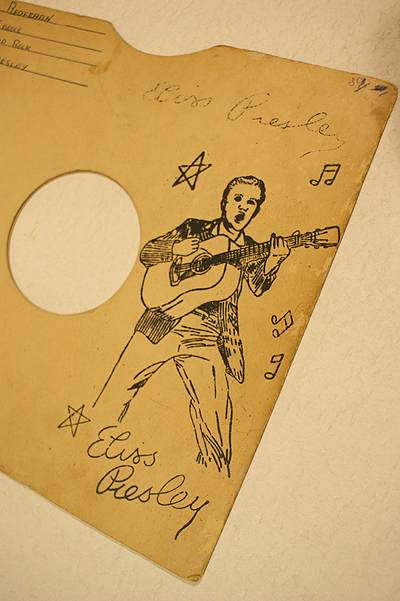 I was quite excited when I found this 10″ sleeve recently, though the excitement quickly diminished when I realised it lacked the Elvis Presley 78rpm record which it once housed – but what do you expect for 50p (it had been replaced by another record)?
As well as the owner having hand-written the disc titles(King Creole – taken from the movie of the same name – and Dixieland Rock) in fountain pen, and adding her name, Lynn Redfearn, above them – there is the question of the image of Elvis on the cover.
At first glance I thought it was perhaps an overprint of some sort. Looking closer while it does appear to be printed, it is more like some sort of home-made screenprint. Maybe it’s an early iron-on wax transfer which was given away in a fan magazine at the time?
Either way it’s a nice bit of home-made fandom from the late fifties. Even if the figure does look more like Jerry Lee Lewis than the King to me.If anyone knows any more do get in touch. 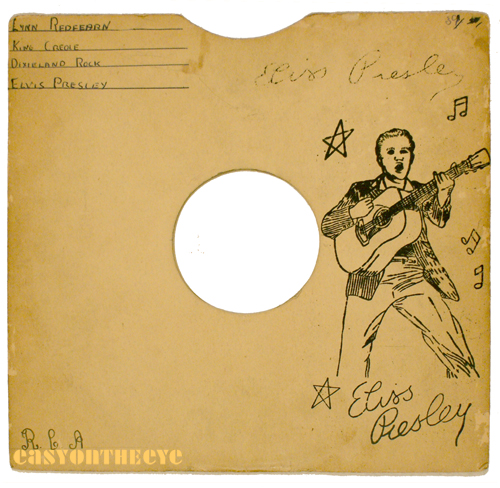 Having worked as a graphic designer in the music industry, mainly in the reissue sector, I now concentrate on the design and publication of books about popular culture - and even write some of them.
View all posts by simon robinson →
This entry was posted in 78 rpm sleeves, Crate Digging. Bookmark the permalink.